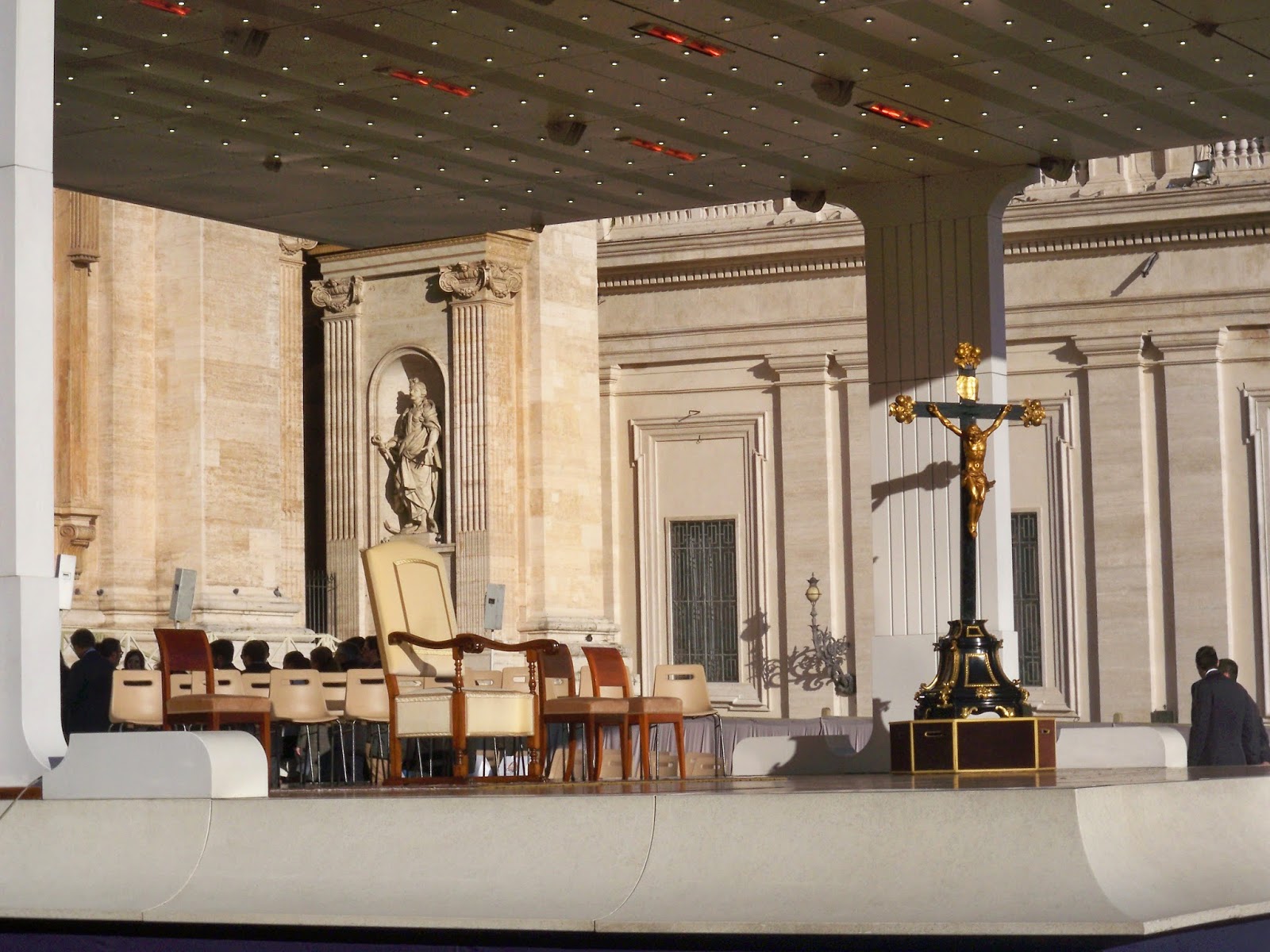 It is hard to believe that a year has almost passed since departing Toronto to attend the 'Joy of Yes Forever' event for engaged couples in Rome. I have decided to re-post highlights from the beautiful experience.
Last January I came across an advertisement from the Pontifical Council for the Family about an event at the Vatican on Saint Valentine's Day where Pope Francis was calling together engaged couples from around the world for an engagement blessing. At the time this seemed to be something far out of reach and quite frankly 'crazy'.
To leave Toronto for a weekend and fly to Rome? Who does that? Well, maybe Cardinal Collins, but he definitely has important things to do!  Anyhow, I kept this between God and I, (did not tell my fiance), sent an email to the PCF and prayed.
While keeping this to myself, I did feel rather at peace with entertaining the idea of going to Rome and began researching flights and times, accommodations, and also looking into my school board's voluntary unpaid leave of absence days. Thank God for those days, because the idea of heading to Rome for a Papal blessing and calling in 'sick' to work is probably a sin that I'd end up having to confess!
Eventually I did inform my lovely fiance (now husband) about what I had been up to. At first he was caught off guard, but not entirely because he was well aware of my stubbornness with ideas, and also of what happens with an ounce of determination and a whole lot of prayer. I translated his lack of a clear "NO" and a deep exhaled breath to mean "Let's do this"(......poor guy). He left my house that night and as I retired to bed I quietly prayed ....
Carmen and I quietly planned our trip together, sorted everything out, and though to be only one couple among thousands, to us it was worth it. There were apparently no tickets for the event and it was to be held in St. Peter's Square, 'first come, first serve'. I assured Carm that if necessary we would be sleeping in the square!!. To my amazing surprise on departure day February 12th. 2014 I received this email prior to our flight....

.......Which, basically says that there are now two tickets reserved for us and that we are to come to get them on the morning of the event! I had no idea how this happened but I was even more excited and grateful to God. One part I should add is that February 12th, 2014 was less than a month to our wedding day (march 8th, 2014)! There was a lot going on.


We arrived in Rome, ate really good pizza, checked into our accommodations, and found the nearest Church to pray a prayer of thanksgiving to God!


"I woke the next morning and said 'Carm, it's Pope day let's move!"


We also met and got to know yet another wonderful priest from the Archdiocese of Toronto while visiting and the fun continued.

Listening to Pope Francis and being so close to Him and his presence truly affirmed God's presence and the humble and hidden life of Christ that he lives. His advice to us as an engaged couple  remains etched in my soul and are those that I often reflect upon, especially in times when I need to be reminded about what the vocation of marriage is.
Marriage is a Sacrament meant for holiness, not for happiness. But it is in striving toward holiness that we undoubtedly find joy beyond measure; a pursuit well worth more than any worldly merit.
In pausing to joyfully remember our experience in Rome, I rejoice in God's providence and His aid in our early experiences as a married couple. Valentine's day will always have an important central focus around the love of God in our lives. The words spoken to us by our Holy Father in Rome will continue to ground us in striving to better understand and live out this vocation.(CC)

Posted by Celeste at 4:46 PM No comments: