The Food That Endures and Endurance of Belief By:C.C. 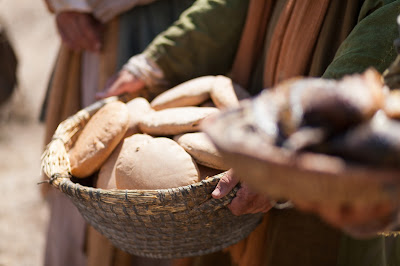 "Do not work for the food that perishes but for the food that endures for eternal life"(John 6:27)
To order our lives in a such a way that we live this finite reality mindful of the infinite is itself a great act of faith. To strive for virtue and obedience to God is a perpetual struggle and experience of wrestling with our own will.
It is easy to work for what we can see. Our physical reality and accumulation of tangible things can give us a sense of presumed security. The unknown and unseen is unpredictable to us and can propose an immense challenge if we lack trust in the Lord.
To first seek understanding robs us of what can only be revealed to us by faith and will never satisfy our desire. Though our belief is often challenged, through faith we can be assured of seeing the works of the Lord and arriving at a point of increased awareness as to what this demands and implies for our lives.
Today's Gospel reading offers us some consolation in this regard. After feeding the five thousand, naturally many frantically set out to seek Jesus. The crowd was undoubtedly astonished at what had taken place. Jesus quickly identifies that their excitement and intrigue is based solely on the satisfaction of their physical hunger. He humbly reprimands them and in doing so affirms that He is the true "bread of life" and that only through Him can we truly understand what it is to " work for the food that endures for eternal life".
We are exposed today to many things within our world that make this reality of eternal life difficult to imagine and pursue. Many prefer vice to virtue , and most times vice is seen as virtuous.
Jesus reminds us today that "this is the work of God, that you believe in the one he sent" (John 6:29). Everything essential for us flows from this imperative belief. The grace to live and order our lives for the food that endures is a natural consequence of our belief  and the primacy of Christ in our lives.
This belief is not an isolated and single event, it is an ongoing living consensual experience. May we pray today for an increase of belief in the Lord, so that we may live out our call in the world with humble awareness and conviction of the eternal reality. (CC)
Posted by Celeste at 6:24 AM No comments:

Catching Fish With Jesus....Literally! by: C.C. 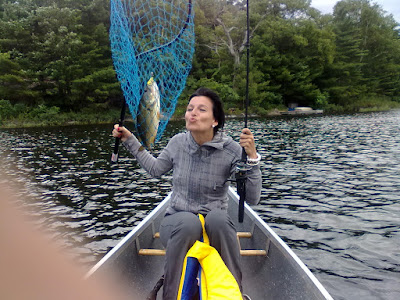 "..............”So they went out and got into the boat,but that night they caught nothing.When it was already dawn, Jesus was standing on the shore;but the disciples did not realize that it was Jesus. Jesus said to them, “Children, have you caught anything to eat?”They answered him, “No.”So he said to them, “Cast the net over the right side of the boat and you will find something.”So they cast it, and were not able to pull it in because of the number of fish. So the disciple whom Jesus loved said to Peter, “It is the Lord.”When Simon Peter heard that it was the Lord, he tucked in his garment, for he was lightly clad,and jumped into the sea.The other disciples came in the boat,for they were not far from shore, only about a hundred yards,dragging the net with the fish.When they climbed out on shore,they saw a charcoal fire with fish on it and bread.Jesus said to them, “Bring some of the fish you just caught.”So Simon Peter went over and dragged the net ashore full of one hundred fifty-three large fish.Even though there were so many, the net was not torn.Jesus said to them, “Come, have breakfast.”And none of the disciples dared to ask him, “Who are you?”because they realized it was the Lord.Jesus came over and took the bread and gave it to them,and in like manner the fish.This was now the third time Jesus was revealed to his disciples after being raised from the dead." (John 21:1-14)
By faith we learn to attune ourselves to the providence of God in most circumstances. There are however times when His hand seems to be immediately providential and consoling. The way in which our Lord revealed Himself while fishing some years ago is a moment that my now husband, and his family members still remember with much joy! Despite the seemingly humorous way that I "out-did" Carmen's fishing record that day, there was definitely a lesson to be learned by our Lord. Looking back the symbolism and grace is even more blatant, and challenging.
My father in his own right is quite the avid fisher man. He however, does not waste time on the "little fish" and likes to catch big ones, primarily Musky. He takes his fishing seriously, and for such reason at a very young age I was eventually kicked off the boat and banned from fishing with him because apparently I "talk too much, and frighten the fish". I accepted this, and found joy during family holidays kicking soccer balls instead,(which proved to be beneficial),while my brother and father hunted for their "big fish".
Fast-forward many years, and some years ago (summer 2011) I found myself in a relationship with a lovely young man (my now husband) who apparently loved to fish. An opportunity presented itself during a cottage weekend with his cousins.
Carmen had brought all of his fishing gear, hopped into a canoe and off he went. He was gone for over two hours, returning to the dock with no fish, and not even one bite. Defeated, but not discouraged he asked if I'd like to come along in the canoe for a ride. I hesitantly agreed, but joined. I watched as he attempted to catch more fish, and then he invited me to try. My first cast provided nothing. Following this I quietly paused and cast my rod out into the water...a bite, a hook, and in the boat came fish number 1! I was so excited. In fact every cast following this one was a fish! I caught 9 fish in 10 casts, all under 1 hour! Looking back it was extremely miraculous, and blatantly providential. It was indeed God's work. 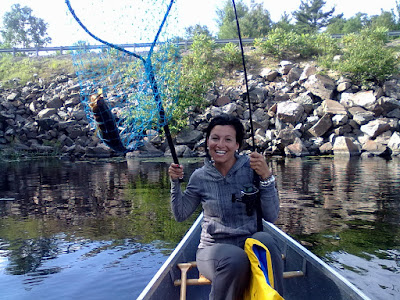 Carmen was amazed, and as a good assistant he netted the fish and aided that process. The glory in all of this is the fact that prior to each cast I prayed for the intercession of St. Peter, one Hail Mary, and one Glory Be. By no means was I attempting to make a mockery of prayer or ask God for something so seemingly trivial, I simply had faith that He would provide and perhaps shine in this moment and teach something very important to Carmen and I through this. He did.
Together, with God's help, we made a fantastic fishing duo. In fact, our relationship up to this point had been quite turbulent as we were discerning vocation, and over discerning, and healing, and converting (which is undoubtedly ongoing). None the less, it was and remains a beautiful lesson today.
The Lord provided. His providence in this moment was rather instantaneous, and it allowed me to recognize that by His grace and remaining in His will, like fishing, He will provide for us. Alone Carmen caught no fish, in coming together we were able to succeed. He supported me in my joy of fishing, despite his own bitterness of having caught nothing. I was his helper and this role continues in an even larger capacity today.
Having decided to remain home with our daughter is much like being in the boat and casting out a net in hope of fish. In quite a literal sense I have come to see how trusting in God's providence for the "bigger fish" in life is a calling for each of us. In working with Him and remaining in His will we will be provided for. Our Lord speaks to us today as His followers and invites us to be obedient to Him and provides abundantly. We must only be trusting and receive all that God sends and all that He wills with a spirit of acceptance and faith. May we learn to recognize in our lives where the Lord is calling us to cast our nets. (CC)

Posted by Celeste at 7:40 AM No comments: