No Texting on The Road to Emmaus: A Loss of Attentiveness & Reverence by:C.C. 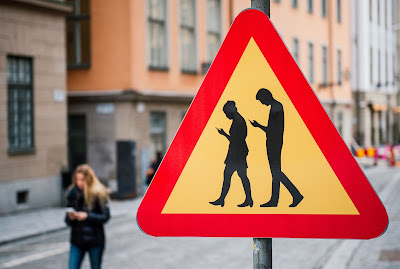 Recently Pope Francis addressed his dismay regarding the prominence of cell phone use during Mass. From this point he elaborated and encouraged the faithful to recognize the importance of what is taking place and Whom it is present among us, “The Eucharist is an amazing event where Jesus Christ, our life, becomes present,”. Naturally, the distracted way that many come to the table of the Lord reveals the reality of a loss of reverence, and the essential understanding necessary to have us partake in the Lord's passion with a well disposed and focused spirit.

Today Pope Francis again reminded the faithful of the need for attentiveness and silence during Mass, declaring that "Mass is the highest form of prayer and not an appropriate moment for small talk". There is an invitation to be silent before the Lord.

We are inundated today with many distractions and the primacy of God seems to be a rarity. However, it can be said that what is more tragic is the underlying reality that there is a loss of belief in the presence of Christ in the Eucharist. And that the "breaking of the bread" becomes commonplace and some routine of sorts opposed to the "highest form of prayer"that leads us to be transformed and renewed in Christ, offering to us the graces that we so need to live out our call as Christians in the world.

I am brought to reflect upon that moment on the road to Emmaus,(Luke 24:13-35) when the pilgrims were walking and Jesus approached them, but they were kept from recognizing Him, carrying on in conversation with Him unknowingly.
I imagine if this were to happen in 2017, there would be very little conversation on the road and perhaps not even the notice of another person approaching as one is often found distracted by their phone, perusing the latest social media feeds etc. There is a loss of so much natural encounter from person to person that encountering the supernatural presence of our Lord becomes even more difficult if we do not attune ourselves to the necessary quiet and interior attentiveness required to recognize what is truly taking place.

When we are reminded to recognize the Eucharist as the most important part of our lives as Catholics and the true focal point of the Liturgy then all other things with little relevance naturally fall away. Only One thing becomes essential. Only One is the most important-Jesus.

A priest I write to from time to time said to me the other day that "Catholics were once known for their interior life that is why the Eucharist was Real for them". This stirred within me as I reflected and could see unavoidable truth in this. The loss of interior life amidst the noise of this world leaves us all outside of the capacity to recognize the Real Presence of Jesus. I view the loss of an authentic Eucharistic life as reason for straying away from our profound truths, and naturally a cause of so much distracted dilution and loss of a richness in faith.

How do we again acquire an interior life? How do we come to know the Real Presence of Jesus?
It begins as simply as putting down the phone and spending some time in silence. (CC)

"He remains among us until the end of the world. He dwells on so many altars, though so often offended and profaned."
- St. Maximilian Kolbe
Posted by Celeste at 1:08 PM No comments:

Laity, Lay More Fervently Into The Lord. By: C.C.


Perhaps the shorter version of this prayer is much better known. And as St. Michael is the patron of our diocese here in Toronto, I bring him forth in prayer for the protection , prudence, and love of truth; a true love of Christ for all our Bishops and Priests.
Posted by Celeste at 7:00 AM No comments: