"The truth does not change according to our ability to stomach it." (Flannery O'Connor) 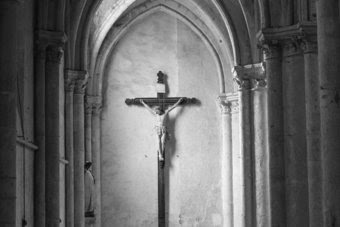 Truth is truth. The idea of what is true may vary from one individual to another, but opinion and personal  ideals do not alter truth or determine it. Truth remains true regardless of who opposes it.

"I believe in one God, the Father Almighty, maker of heaven and earth, of all things visible and invisible. I believe in one Lord Jesus Christ, the Only Begotten Son of God, born of the Father before all ages. God from God, Light from Light, true God from true God, begotten, not made, consubtantial with the Father; through him all things were made. For us men and for our salvation he came down from heaven, and by the Holy Spirit was incarnate of the Virgin Mary, and became man. For our sake he was crucified under Pontius Pilate, he suffered death and was buried, and rose again on the third day in accordance with the Scriptures. He ascended into heaven and is seated at the right hand of the Father. He will come again in glory to judge the living and the dead and his kingdom will have no end. I believe it the Holy Spirit, the Lord, the giver of life, who proceeds from the Father and the Son, who with the Father and the Son is adored and glorified, who has spoken through the prophets. I believe in one, holy, catholic and apostolic Church. I confess one baptism for the forgiveness of sins and I look forward to the resurrection of the dead and the life of the world to come. Amen."
This is truth; and this is what I believe to be true. It was not always easy to "stomach it" but, it did not cease to be true because of my difficulty to accept it. Years of unrest, of ignorance, and of wresting with the truth led me further from a sense of peace and security in anything. It led me to substitute truth for multiple lies and falsities;attempting to stand on firm ground when nothing but The Fullness of Truth could sustain the weight of my desire(s). There is peace in truth. There is joy; everlasting joy in the presence of truth. And yes, it is not always easy to stomach because the Truth demands a change. It demands us to step outside of our selfish inclinations and outward in self-giving love. This truth demands obedience and sacrifice to those called to live in light of it. "I believe" is not something uttered by lips alone but one I commit myself to in deed as much as I am able to everyday.
The truth does not change when I falter or stumble.Through my weakness the strength of Truth is affirmed. The truth does not bend to accommodate my emotions, and it is not to be held against others in judgement.When I say I believe in this truth then I commit myself to follow wherever I am led. To stand up when others may oppose it and to follow persistently even when ridiculed. The truth remains true even when it is deemed "unfashionable" or "outdated". "The truth does not change according to our ability to stomach it." We must change our appetites and seek Him who satisfies our greatest hunger and fulfills our deepest need. (CC )
Posted by Celeste at 10:00 PM