A `Bushel Of Falsehood` & A Lesson From Archbishop Lynch. By:C.C. 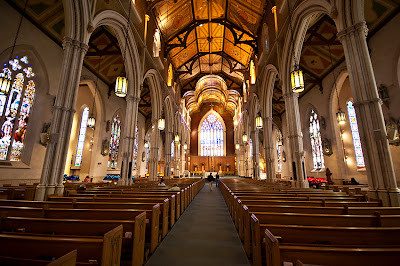 "The Ecumenical Council of the is only known to the world in general from reports of newspaper correspondents. These reports are generally very unreliable, many totally false, others containing a grain of truth in a bushel of falsehood, and cannot be relied upon. These reports generally came back to us in , and amused and often surprised us, as each bishop received the leading newspaper of his city. A weekly journal kept me posted in the news of the day here and brought me news from that I was entirely ignorant of. The secular newspapers, as a rule, were what we term in opposition." (Archbishop John Joseph Lynch-Lecture at St. Michael's Cathedral , following the first Council)

I have taken great joy in recently reading about the history of the Archdiocese of . This city is currently a place enduring much criticism as a result of the Mayor, and it is most important to keep attention on our Lord- He Who truly governs all and has gifted us, by faith, with strong Catholic Shepards.
By looking back to the beginning days of this Archdiocese I have come to a greater sense of respect and reverence for what it is that these Shepards have done to pave the way for their successors in leadership, the priests of our parishes, and also for the laity.
I have chosen to focus tonight on these important words shared above from the first Archbishop of the Most Reverend John Joseph Lynch. While I was reading excerpts from a lecture he gave at St. Michael's Cathedral in Toronto (following his return from the first Vatican Council) I could not help but be drawn to his eloquent words about newspaper reports concerning matters of Vatican events. I wonder what he would have to say to us now about much of the media`s coverage on Pope Francis.
It is important to unearth these words from Bishop Lynch as I find that they affirm the fallibility and error in much of what we read, hear, and receive today. This is most especially true regarding media coverage on Pope Francis and other matters concerning The .
The immediate accessibility of information has allowed for a large number of articles, interviews, and video footage to surface about our Pope. This rapid sharing of news carries both positive and negative elements. It is important to approach information that we receive regarding the matters of our Holy Catholic Church with great discernment and understanding of our faith.
Many are often inclined to cling to the `grain of truth`within the `bushel of falsehood` for varying reasons. And while it can somehow be leading one closer to encountering the fullness of Truth, it can also damage and alter perceptions of  this Truth.
The `grain of truth` that we may cling to amidst the `bushel of falsehood` may be a reflection of our own selfish desire and our unwillingness to surrender to The Complete Truth found in the Holy Catholic and Apostolic Church;Truth that is unwavering and does not bend with the opinions, views, and wants of a majority, but remains fixed and concrete as when it was proclaimed by Christ. I do not desire to judge the opinions and values of others or to determine that their sentiments or desire for `change` is wrong, I am simply at peace with what has always been and remains consistently right  and just (C.C.)

``The secular newspaper correspondents have published that Papal Infallibility means that the Pope is like unto God, Supreme, not subject to any error, and can make truth falsehood, and falsehood truth. I need hardly say that this definition is utterly false. Another journal says that Papal Infallibility means that the Pope is impeccable — cannot err — and that all his sayings and doings are infallible; that also is false. He is subject to human weaknesses, and confesses them, like every good child of the Church, and receives absolution and penance. An other writer says that the Pope can prophesy and invent a new religion as he pleases — well, that also is false. He receives no gift of prophesy by his election to the Popedom and can invent no new dogma or religion ; he can only pronounce that such and such truth has been always in the Church, and has been revealed to the Church by the Holy Ghost on the day of Pentecost, according to the words of Christ, " I will send you another Paraclete who will teach you ALL truth — not truth, but ALL truth.`` (Archbishop John Joseph Lynch)