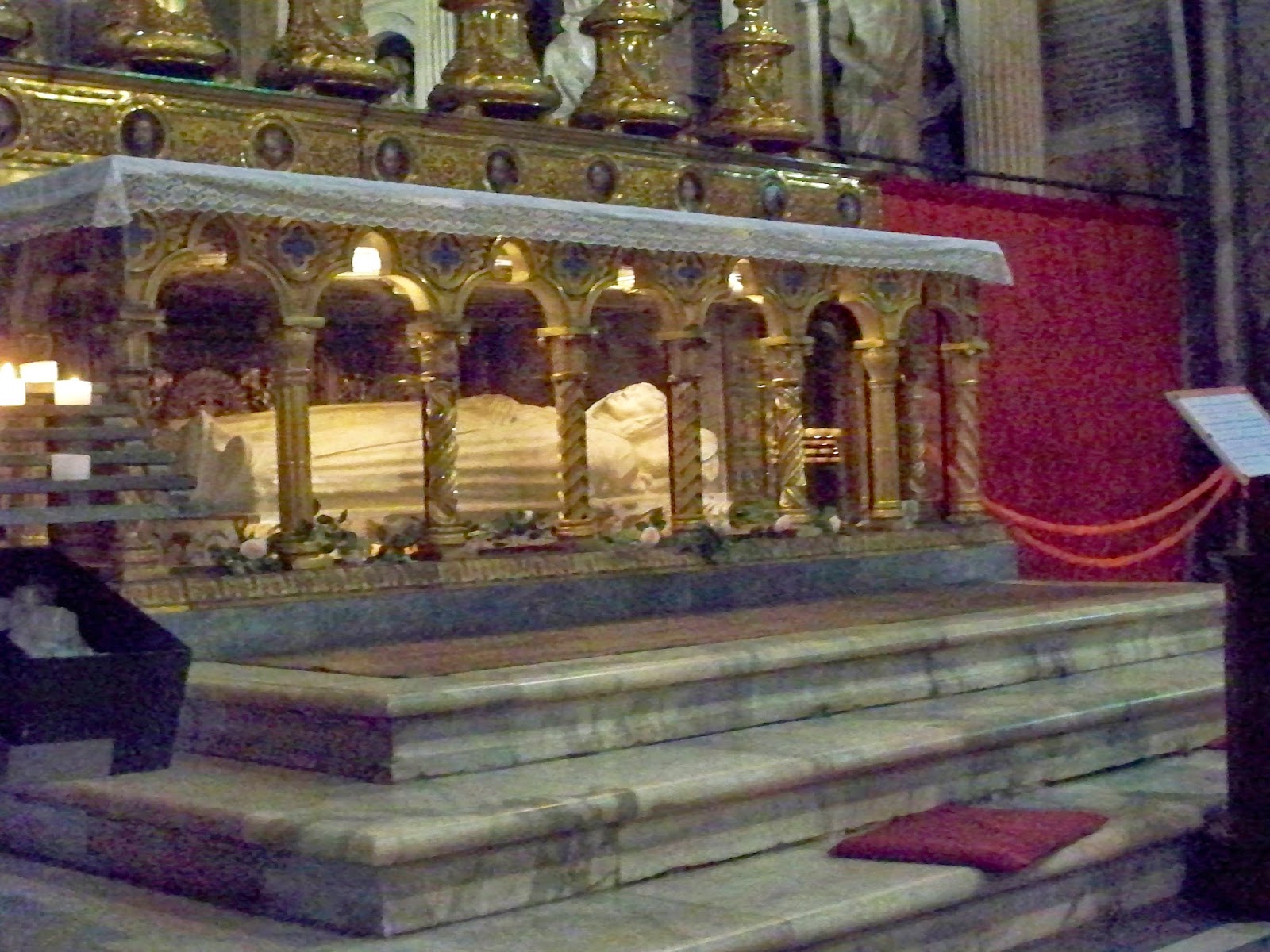 Today the Church celebrates the feast of Saint Catherine of Siena. There has been much talk recently of sainthood in light of the canonizations of St. John XXIII and St. John Paul II. Sainthood and the veneration of these holy men and women is often misunderstood and interpreted as 'misplaced' glory or some form of 'idol worship'. It is important, and rather crucial to rid of this misunderstanding.
To honor these holy men and women of God is to give praise to God. It is to praise the manifestation of His grace and His greatness through such humble and lowly cooperative servants of Christ. To venerate the Saints is to recognize our personal call to holiness as His faithful, and to also understand the sanctity of living hidden in Christ. In a recent interview, Cardinal Collins spoke of the saints and their significance as models of virtue. "all of us are called to holiness and we can always look to the models of the great saints".
My interest in the lives of the saints began with a gift from my nonna when I was nine years old. I was much too young to fully grasp their importance, and my Italian too poor at that time to understand what it was my grandmother was trying to share.

It did not take long to explore this book and learn about these holy men and women of God. Naturally being named Catherine (Celeste, being my middle-name) I was drawn to the list of St. Catherines found in the book. St. Catherine of Siena was definitely one of my 'top favourites'. At my young age I was horrified reading on about the other Catherines, I realized that St. Catherine of Alexandria's manner of martyrdom was much too much for me! And though still very young and ignorant of what Saint Catherine of Siena had done, I spoke often to her in prayer.
Many years later and sadly increasingly ignorant of the faith, it was God's grace that awakened me to return to this former practice of prayer and also to include Saint Catherine of Siena among my intentions. Over time as this continued I found myself growing in love toward many saints, but particularly seeking to know more about this young woman of Siena. I threw myself into her writings, finding great comfort and inspiration.
Her active life in the Church and the immense impact that she made was accomplished in her young adult life, which were also to be her final years as she went Home to our Lord at the age of 33. She was lively and confident, bold for the faith, and stood up for what was right and just without being self-righteous. I am sure to quietly pray to her before writing and keep a tiny statue of her beside my computer before blogging.

This year brought particular affirmation to me about the power of devotion to our saints, of God's grace, and of the friends we truly have in these holy men and women. In January I came across an advertisement from the Pontifical Council for the Family about an event at the Vatican on Saint Valentine's Day where Pope Francis was calling together engaged couples from around the world for an engagement blessing. At the time this seemed to be something far out of reach and quite frankly 'crazy'.
To leave Toronto for a weekend and fly to Rome? Who does that? Well, maybe Cardinal Collins, but he definitely has important things to do!  Anyhow, I kept this between God and I, (did not tell my fiance), sent an email to the PCF and prayed.
While keeping this to myself, I did feel rather at peace with entertaining the idea of going to Rome and began researching flights and times, accommodations, and also looking into my school board's voluntary unpaid leave of absence days. Thank God for those days, because the idea of heading to Rome for a Papal blessing and calling in 'sick' to work is probably a sin that I'd end up having to confess!
Eventually I did inform my lovely fiance (now husband) about what I had been up to. At first he was caught off guard, but not entirely because he was well aware of my stubbornness with ideas, and also of what happens with an ounce of determination and a whole lot of prayer. I translated his lack of a clear "NO" and a deep exhaled breath to mean "Let's do this"(......poor guy). He left my house that night and as I retired to bed I quietly prayed ....
"Saint Catherine, you brought the Papacy back to Rome, now help us get to Rome and receive a Papal blessing"!
Carmen and I quietly planned our trip together, sorted everything out, and though to be only one couple among thousands, to us it was worth it. There were apparently no tickets for the event and it was to be held in St. Peter's Square, 'first come, first serve' sort of event. I assured Carm that if necessary we would be sleeping in the square (poor guy...again). To my amazing surprise departure day February 12th. 2014 I received this prior to our flight

.......Which, basically says that there are now two tickets reserved for us and that we are to come to get them on the morning of the event! I had no idea how this happened but I was even more excited and grateful to God. One part I should add is that February 12th, 2014 was less than a month to our wedding day (march 8th, 2014)! There was a lot going on. When I received this email I was sure to also pray in thanksgiving to Saint Catherine of Siena, just in case she had anything to do with this! We were off....


We arrived in Rome, ate really good pizza, checked into our accommodations, and found the nearest Church to pray a prayer of thanksgiving to God!


"I woke the next morning and said 'Carm, it's Pope day let's move!"


We also met and got to know yet another wonderful priest from the Archdiocese of Toronto while visiting and the fun continued.

Listening to Pope Francis and being so close to Him and his presence truly affirmed God's presence and the humble and hidden life of Christ that he lives. His advice to us as engaged people remains etched in my soul and are those that I often reflect upon, especially in times when I need to be reminded about what the vocation of marriage is. Marriage is a Sacrament meant for holiness, not for happiness. But it is in striving toward holiness that we undoubtedly find joy beyond measure; a pursuit well worth more than any worldly merit.. Now, back to Saint Catherine of Siena!!
On February 15th, 2014, following our wonderful day at "The Joy of Yes Forever" event, Carmen was set on heading to a store called Gammarelli's in order to buy a requested gift for a dear friend back in Toronto. In fact, what this man wanted specifically was a mini Cardinal biretta for his desk! Apparently these mini birettas are sold around the installation time of new Cardinals in the Church. I hope he enjoys this gift because we had to walk half way across Rome from where were staying to get it....God had grace in mind!
In walking through Rome Carmen and I often took the chance to pause and visit many Churches. On this day; following the mini biretta moment, something amazing happened! We were both pretty exhausted. Carmen saw some Roman ruins and was eager to check them out, but like the good and faithful man that he is he agreed with my plan instead (poor guy).
I spotted a Church while walking and really wanted to go into it and pray. And so we entered  Santa Maria sopra Minerva . The beauty of what followed stems from my complete ignorance and God's amazing grace. We walked around the Church casually apart from one another and took personal time for prayer. The side chapels are captivating, like most Churches in Rome and it is easy to spend time taking it all in. After making my way to the main altar I could see that there was a tomb beneath it and some people gathered there in prayer.
This Church that we casually walked into to pray is the home of Saint Catherine of Siena's Tomb. I knelt and wept. I wept, and I wept. Carmen stood beside me, prayerful and then comforted me while handing me Kleenex after Kleenex. He was well aware of what this moment meant to me.

In my reading of Saint Catherine of Siena, I never did read about where her tomb was or what happened at the end of her life. Given that she was from Siena I had made the assumption that her tomb would be there. This moment has remained one of many profound moments that Carmen and I experienced while in Rome.  Saint Catherine of Siena not only interceded by aiding us to get to Rome, but was also quite adamant that I knew she was listening.

Today on her feast I am brought to reflect upon a 'crazy' last minute, four day trip to Rome, receiving a Papal blessing, and being before the tomb of a beloved Saint who brought the Pope back to Rome, and me to the Pope!