" For this child I have prayed and the Lord has granted the desires of my heart" (1 Samuel 1:27) 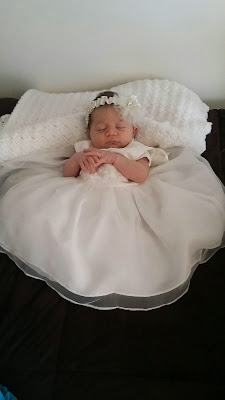 I hesitated to share the intimacies of our daughter's birth story out of the initial desire to  enjoy the sacredness of each moment with her and to allow for everything to 'sink in'. After  some prayerful reflection I felt it was important to share her birth story to bring glory to God.
Every birth, every beautiful gift of life within the womb of a woman is a testimony of our Lord's majesty and goodness. The experience is full of awe. It is difficult for me to imagine any woman carrying life within her and not contemplating the One who gave us all this precious gift of life--"You formed my inmost being; you knit me in my mother’s womb" (Psalm 139:13).
The experience of my pregnancy allowed me to enter more fully into the mystery of our Lord. Not only was I stretched in the literal sense, but also spiritually. My awareness of the unknown was expanded and the reliance on hope and trust in the Lord was renewed and prayed for every day (often many times in the same day).
My husband and I decided to keep the gender of our baby a surprise.  Leading up to the  due date of March 18th we often tried to guess what we were having. This too was a test of  my patience! Given that I was due to deliver during the Lenten season I thought that my Lenten sacrifice could be to offer up my labour pains for our Lord's sufferings and mercy. Yes, I was naive at this time to the pains to come, but I was determined. I shared this desire with my spiritual director, who replied without hesitation "You know Catherine, I read somewhere that the pains of child birth are the equivalent of sixty bones crushing simultaneously, or something like that" ...well Father, thanks for the encouraging words! I left there recognizing the need to enter more fully into the preparation with prayer, while also aware of my own physical limitations.
St.Gerard (patron of expectant mothers) and I became great friends, but I also decided that I would need to think of more concrete offerings to meditate upon throughout the labour experience. As the due date approached I entered into the Psalms and following the advice of a priest in Confession read and re-read the scripture of Jesus in Gethsemane. I  thought of three intentions (in no specific order) and kept them in my heart.
My intentions were The Passion of Our Lord and the excruciating pain He endured. I also committed to offering up my labour for the women who have had abortions, for their emotional pains and for our Lord's mercy on them. And lastly, but not least, I chose to offer up any sufferings to come for the 21 Egyptian Coptic Martyrs, as that story truly touched my heart and the images of them kneeling on the beach in surrender left a painful imprint within me. I knew it would take discipline and focus to think of these intentions when my "hour came" (John 16:21).
And the hour(s) did arrive on Sunday, March 15th, 2015. My water broke at home (thankfully) and the journey to delivery began. I will spare the specifics. Things progressed well and I endured much of the early stages of labour at home before my midwife asked me to come to the hospital to monitor baby and me at 2pm. Baby and I were doing healthily and  she was confident to send me back home as she thought I had much time to endure before it was "Go" time.
My husband was truly the hero this day with support, patience, and incredible focus operating a motor vehicle while under the influence of a wife in labour! The agony became more intense as soon as we left the hospital to return home. Once home, I entered deeply into my intentions, plugged into my ipod , which my husband had loaded with audio from my favourite Gregorian Chant  and waited in expectation of more to come.
By 8:00pm we were on our way back to the hospital, and at this point I was quite sure that if labour had not yet fully arrived then I would not be able to keep going! When we arrived to the hospital my husband dropped me off at the Emergency entrance said to wait there for him and a wheel chair as he parked. I told him I'd be walking right in to labour and delivery and that I had to keep moving ...off I went. This walk up to labour and delivery was truly a  grace. It was during this time of painful walking and stumbling that I was again able to refocus on my intentions.
My wonderful midwife (a seriously devout Polish Catholic) was there to greet me with open arms. She gave me a very soothing and maternal hug. Eventually my husband arrived not too long after, carrying multiple bags and on a mission! By roughly 9pm I was checked for the first time and I was 9cm dilated!!! It was indeed "GO" time shortly. My husband placed a crucifix that we had brought from home above my head. By 11:24pm our baby girl had arrived! 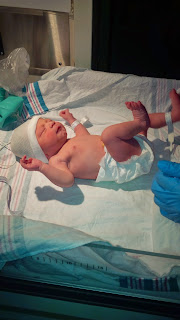 There is much that remains in the sanctity of silence and experience alone. However departure day on March 17th, 2015 was truly where the most affirming sign from our Lord was made visible.
My husband and I were leaving the hospital and he had gone to get the car telling me to wait with Eliana inside as he felt it was too cold to wait outside. I am much more stubborn. I began to leave through the main doors and was stopped for a moment by two men attempting to enter at the same time. These men we robed in black cassocks, one gentleman had a rather long beard and was carrying a small wooden ornate Crucifix. I motioned for them to enter, but they insisted that I depart first. I was intrigued by them. It was rather cool so I walked back inside of the lobby. The man with the beard and Crucifix was seated across from the information desk and I approached him, gazing at the Crucifix in his hand. He held Jesus out to me and I reverently did the sign of our faith and kissed the Crucifix with my hand. I was greatly moved and began to ask him some questions. Embarrassingly the first question was "Are you a Christian?" (yes, it was glaringly obvious, but I'm not sure what overcame me). My next question to him was "Are you Orthodox?" to which he said yes. I then asked him if he was a priest and he replied yes. I told him that I was Roman Catholic and without hesitation he brought his hand to his heart and said " My brothers".
The exchange was very emotional. I introduced him to Eliana and he blessed her. I began to weep, and being 2 days postpartum these were quite intense tears! He sat back down and I asked him what type of Orthodox Christian he was, and when he replied that he was Egyptian Coptic my tears and awareness of God's providence and majesty increased.
I shared my labour intentions with him....telling him that I had included his martyred brothers in my intentions as I continued to weep. He stood up and gave me two prayer cards and said "Remember St. Paul always".
Here below are photographs of the cards. I obviously have no idea what they say, but that  is unimportant. 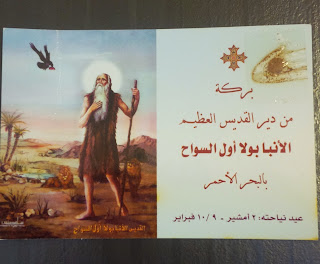 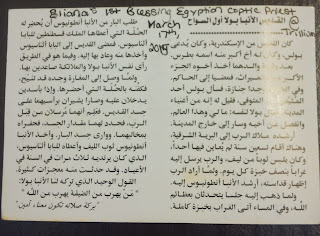 My husband then called me and I walked out of the hospital crying. My first words to him in response to his perplexed look were "I'm okay, God is so amazing."! He assumed it was hormonal, but on the ride home I shared the story with him and showed him the prayer cards. He was just as moved. I am so grateful that our Lord gave me the gift of this tangible keepsake to remember the blessing of this day and to share it with others. Should Eliana ever doubt God's presence in her life I will be undoubtedly sharing the story of her birth and leaving the hospital with her!!


The name Eliana means "My God has answered" and our Lord truly answered me with  her life and affirmed my Lenten offering. May the glory and praise be to God. (CC) 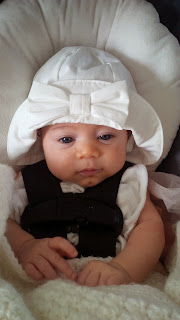