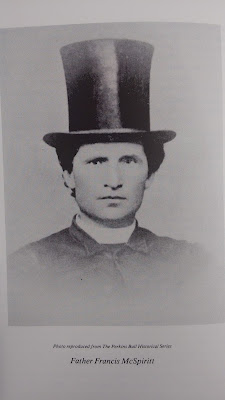 Hindsight is always a good teacher. If we are graced enough to recognize the blessings of yesterday while we're still living, then we do well to be attentive to these graces and give thanks to God. Some of these graces are blessings of places we have come across and people we have met.

By faith, this also includes people we have not met, but those that have somehow touched us and blessed us by our coming to know them in prayer. One of these people for me has been an old Irish priest named Fr. Francis McSpiritt.

As our Archdiocese prepares to celebrate it's 175th anniversary, I felt it to be a fitting time to highlight one of the most prominent and ordinary servants of God that served within our diocese in an extraordinary way.

I am not seeking to foster a fanaticism of sorts, but to bring forth some of the most beautiful stories of healing and intercession that took place. St Patrick's Church in Wildfield as we see it structurally today is the fruit of many answered prayers and humble tithes as a natural consequence to supernatural aid from the hands of a humble surrendered Irish priest. Money is said to have poured in from numerous pilgrims and those offering thanks to God for what was done through Fr. McSpiritt's intercession. However, Bull notes that Fr. Mac had left the parish in Adjala "largely because he had felt unequal to undertaking the building of a new church. Now a similar situation confronted him at Wildfield. Money poured in freely in his declining years, and although he gave full vent to his charitable inclinations he still had enough and to spare." (Bull 346) "The priest chose to build the new church a little further south, on a knoll from which the ground falls steeply away on three sides. Thus the tall spire of the new St. Patrick's can be seen from miles away. This church was open free of debt." (Bull 346) One could just imagine a pastor like him fronting the family of faith campaign!

My interest in this history is heightened because I attended St.Patrick's Elementary School from grades 6-8 ,received the beautiful Sacrament of Confirmation at that parish, and was given the gift of our Lady's Miraculous Medal  there,  and somehow, only by the grace of God graduated grade 8 with a Christian fellowship award, when surely I spent more time in the principal's office for talking too much. There were many soccer practices held on the parish grounds, yet during these times of ignorant youth I had not known the rich history.

Many years later in July of 2012 I had a friend named Patrick from London, Ontario up to visit. I had met him at the Abbey of The Genesee (of course) and thought it would be fitting to prayerfully spend some time making a mini pilgrimage throughout the area and up to Tottenham to explore some of the older and beautiful parishes surrounding the vicinity. Given Patrick's Irish roots, and of course his love of St.Patrick we thought beginning near my home was the best choice.

As we prayerfully perused the grounds and chatted with one another we stumbled upon the grave site of Fr.Francis McSpiritt. Patrick made some casual jokes in passing about his top hat and his name (Lord, have mercy on us) and we continued on. It was not until we were visiting the other parishes and the name McSpiritt came up again that my interest was peaked. I jotted this priest's name of long ago into my journal and carried on.

I returned home with interest to learn more about this Fr.Francis McSpiritt. My reading took me through learning about the history of the entire archdiocese from it's conception and I was enthralled. Specific titles for those interested in following suit would be Catholics at the Gathering Place, McGowan and Clarke and From Macdonell to McGuigan, William Perkins Bull. I learned of many interesting figures throughout our local Church history and situations that were trying and truthfully some that would give any good Bishop quite the headache!

The stories of Fr. McSpiritt's healing were those that stood out as a source of comfort in a trying time. His first reported cure was while he was in Niagara Falls at St.Patrick's parish and became known as a "man of miracles" . "Here he was reported to have returned sight to a blind man and to have restored peace to a girl suffering from St. Vitus Dance, a nervous disorder." (150th Anniversary pg 7)

Many of the sources site continuous healing and cures at the hands of Fr. McSpiritt by the grace of God. He did not seek reputation for his healing or any glory. He did not gloat about what was occurring and made known to those who retold his miracles that it was God's work. One protestant man seeking healing said the reason for his coming to Fr. Mac was because "they say you have some power of witchcraft." "Get down on your knees," Fr. Mac ordered."Make the Sign of the Cross. Now go home and tell your friends it was by the sign of the Cross you were cured."(Bull 335) Fr. Mac, as he was often referred to was a selfless and tireless servant , he is reported to have even slept in the basement of the parish to be readily available to those in need.

Surely there are many ordinary men doing the extraordinary within our diocese daily, but in looking back to McSpiritt one can see that he notably stood out among the flock. Undoubtedly this was a time of great trial too. As naturally Archbishop Lynch would have been sensitive to the optics and grandeur that Fr.McSpiritt's prayerful intercession of healing was creating around the area. In retrospect I am sure that the scandalous behavior and tavern hopping during that time on part of some wayward priests would have been just as concerning. I sympathize with Archbishop Lynch as he must have been between a rock and a hard place indeed.

"When tales of Fr.Mac's remarkable cures reached Archbishop Lynch, that ever diplomatic and wary prelate earnestly besought him to give no further 'thaumaturgic exhibitions', but in vain did the Archbishop tell him that a charge of charlatanry might be brought against him.Father Mac was not to be turned aside. He regarded himself as a divine instrument and under command from the Master to use his gift for the alleviation of human misery. To the  ever-recurring question how he worked his miracles, his simple reply was, "It is between the afflicted and God; I know nothing of it."(pg 333 bull)

I am sure we have missed many saints among us out of fear of heresy and the prominence of some outlandish crazy folk, but I trust that the Holy Spirit reveals to us the truth of Christ among us with maturing of time and humble simple faith.

We can not look back and blame those who obedient to their roles and the grace given unto them at the time would have sought to "silence" the works that were taking place. We must understand this to be work of grace too, either the complete resistance to it, or honest obedience to one's own prayer. Regardless of what was tried or spoken the truth is that Fr. McSpiritt's healing and gifts continued.

Those touched by it firsthand testified to it time and time again and have undoubtedly passed these stories on throughout their own families. I am sure it is enough to reside there faithfully in the heart and soul of the faithful. True holiness does not seek fame, or recognition. The veneration of the ordinary men and women extraordinarily graced by God is a cause that belongs to people much beyond me and in some Vatican office amidst many books, files, and records!

We can earnestly pray and accept the graces though and pray for intercessions. I do believe that a saint is a saint whether known to the masses or not. And truly should we pray , keeping Fr. McSpirrit in mind,  say a prayer for the repose of his soul. It is amazing that he resided so near to us, that I could be confirmed there, receive the gift of our Lady, and be led there some years ago and stumble upon his grave.

Prior to his death those weary at anticipating his parting from the world were comforted by his words "A bit of earth from my grave will do ye...." he replied, "say a little prayer for the repose of my soul when you take it." In fact, for a long period following the burial of Fr. McSpiritt, parishioners took earth from the grave site with the strong conviction that a clod of earth from his resting place carried curative powers. Oral tradition recounts the frustration of the local grave keeper who was unable to maintain a decent covering over the spot where Fr.McSpiritt had been laid to rest."(9)

Naturally in 2012 I did just that following morning Mass one day, to then be confronted gently by the Italian pastor there "Ma cosa fai?" sparing some words of course we exchanged pleasantries.

......"His influence was felt by good men of whatever faith, the example of his saintly life raised the moral tone of the community. His own people flocked to him to confess, to ask advice, and to be strengthened against temptation. The sick and the dying begged for his assistance. He did remarkable things, but the man was always bigger than his work." (350)