What's In A Name? Feast Day of St.Celestine V, By:C.C.

The extent I knew of my middle name, Celeste  in 2011 when I opened up this blog, was that it's meaning is "heavenly" and that I share a middle name with my paternal nonna, and also with my godfather whose middle name is Celestino.

Beyond this, I had no deeper care for meaning. However, it did seem all the more appropriate to be using this "heavenly" name as I blogged the experience of attempting to draw nearer to meriting heaven (still stumbling and typing away).

Celeste stuck, and I grew to like it. Although in learning Catherine means "pure" I was quite drawn to that too. Too bad I wasn't made aware of the meanings of my first and second name before many falls..names better suited then would have been impure and hellish, I digress.

Over time, I became more interested in origin, precisely listening to my grandmother share stories of her hometown Sant'Angelo, Limosano in Molise, Italy. My father was born there. It is good to learn our history, there are lessons and wisdom to unearth.

I recall speaking to my nonna some years ago about our shared name, she went on to tell me that her nonna was also named Celeste and many others down the line in her family also had the masculine name of Celestino. It's not uncommon in Italian tradition to be passing down names, so it wasn't completely unnatural to see this pattern. However, one day she told me that this name came from a Pope born in her town. I was quite confused, primarily because I hadn't heard of him, and secondly because her recollection of the history was very scarce as well. I dug deeper. And in digging deeper I discovered a fascinating man, a holy man, who desired a quiet life of solitude as a hermit, and ended up briefly serving as Pope before resigning. He is also the patron saint of Sant'Angelo.

His life, I came to learn was one of mystery. Even the exact town and date of his birth are argued over. There are two places in Molise that claim to be his birthplace, Isernia and our hometown of Sant' Angelo in Campobasso. Obviously, I choose to claim him as belonging to Sant' Angelo....shamelessly. 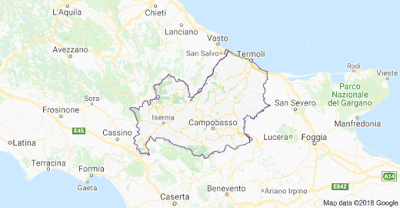 Saint Celestine was born Pietro Angelerio, also known as Pietro of Morrone. in arguably 1209 or 1215, he was the 11th of 12 children and came from a farming family. He was not poor so was able to have his studies paid for.

He felt called to enter the Benedictine order, as he felt strongly drawn to ancient tradition and especially a call to detach from the world. He sought to live alone in caves and other very solitary places removed from the world.

A professor from the University of Verona, named Paolo Golinelli stated that "Pietro felt life should be articulated by prayers and very little sleep" He longed for living a life of simplicity and austerity. He also lived in a very turbulent time of the Church history. Between 1217 and 1270, five crusades were announced and several chaotic situations arose from there, including a great deal of heresy.

Pietro's quiet life in the caves and mountains surrounding Molise became noisier as people were made aware of his apparent holiness. People flocked to visit with him often, and he would soon then quicken his steps to flee seeking the solitary and prayerful life in a new secluded place.

He was considered then a living saint, and also attributed to being a "miracle worker" people claimed being healed by him in various ways.  Golinelli said that "his miracles were very peculiar , almost as a type of rural and country healer" He was also very cautious about company with women, and never wished to see them, if they should have required his aid for healing then the husbands of these women were sent to see Pietro on their behalf.

He had grown a small following of men who desired to live his way of life, a way of life based on the traditional Benedictine order, with an even more intense austerity than what was observed being lived by him. It is noted as being similar to the Cistercians, even in dress. I found this point to be most intriguing. For me, the Cistercian charism has been one of great inspiration and has helped form me.

There seems to be scarce information about what the life of his order was like specifically, making it difficult for me to draw definitive differences or concrete similarities. But the depth of reverence for silence and solitude from the world and prayer is woven within both.

Pietro wanted to escape the political current of his time, while also mindful of it's reality and his desire to establish his order securely he walked to Lyon, France in 1274, travelling 1200km to speak with Pope Gregory X ,and to take part in the "Council of Lyon in hopes to get his order approved. Because it was not possible to found new orders.During the Fourth Council of the Lateran, a special decree had already been issued : ne nimia monacorum 'Let there not be too many monks" ..limiting the proliferation of orders, but his order is included in the Benedictine tradition, for this reason it is not a new order, but rather a particular version of the Benedictine monasticism."

Through such Pietro was able to have his order secured, they would become known as the Celestines, following his acceptance of the Papacy and him taking the name Pope Celestine V, an event which came about in the oddest of fashions.

The Church was in a complete mess. There was a struggle between the powers of Roman families and the Cardinals within the Church, and for nearly 28 months at the time there was no Pope in Rome.

Pietro wrote a letter to the Cardinals in the conclave and expressed great concern for the misfortune that this is bringing upon the Church in not being able to elect a new pope.

Essentially the cardinals unanimously chose Pietro to be Pope!

It was noted in the documentary that reasons for this included the facts that he was not involved in the power games of the royal families, nor did he enjoy great prestige, and that he could be a great calm to the storm.

His tone of humility and poverty was amplified when he rode into L'aquila (the place of his coronation ) on a donkey and not a white horse. It was said that he wanted to deliver a message of poverty and a truly Christian lifestyle of holiness into the church of his times.

He was also most inspired by St.John the Baptist, and chose the day of his martyrdom to be the one of his papal coronation. It was noted that over 200,000 pilgrims came to this event, yes, even before the world of twitter and social media, that is quite profound! Even Dante Alighieri was in attendance from Florence! People were so hopeful for renewal in the Church by the hands of this new hermit holy Pope.

A month into his papacy he appointed twelve new Cardinals and wanted to quickly weed out influences of noble Roman families.

The documentary spoke of a letter he wrote in his acceptance of the papacy, where "he references the beheading of St. John  the Baptist, and compared his tiara to the scimitar on the saints neck" meaning that he would sacrifice himself for the unity and forgiveness of the Church. For Celestine, the greatest sin is the separation, the schism within the Church."

He resided in a castle in Naples, and demanded to live in an underground , damp cell, opposed to the luxurious apartment prepared for him. He sought to maintain as much as possible his life as a hermit. That is what he most desired to be, praying and meditating. It was evident during this time that resignation was on his mind, however there naturally arose the question, "Can a pope resign?"

The man who would become his successor, Pope Boniface VIII, came forth with a solution

"When a cardinal agrees to become Pope , then he gives his consent to the election of the Pope. Therefore, he may withdraw this consent without being influenced by anyone but his own will. "

In Decemeber of 1294, St.Celestine summoned the Cardinals, and announced what has become historically known as the "great refusal"

People were very disappointed in this. The faithful were hopeful in him for change in the Church, and to put an end to the "material church".

As for Pietro , the humble monk , he returned to a cell, although this time as a prisoner of Pope Boniface VIII, who feared he would become an antipope, and held him in the castle of Fumone, where he resorted again to a life of prayer and meditation.

As for the Celestines, they are no more. But as for me, I find great comfort in coming to learn of this holy man and saint from my father's hometown.

I am equally thankful that the message of needed holiness is alive in the Church today.

Celeste, has now become a name of greater value to me than it was before. In speaking with my godfather today, in light of my recent learnings, I assured him someday we would venture to Sant'Angelo and the surrounding areas to pay homage to a humble holy monk from our ancestral home and the reason for our sharing of middle names. (CC)

St.Celestine , pray for us, and for the holiness of our Church.